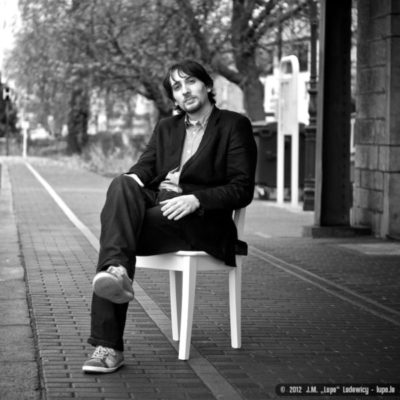 Born in Madrid, November 1983. He spends his childhood in Valverde del Jucar, village of the central provincial of Cuenca in Spain.

In 1993 a small school of music is founded in this village with the purpose of creating a music band. He starts studying music, first with the clarinet and some months later with the piano in a private academy in the nearby city of Cuenca. In 1997 he enrolls in the music Conservatory of Cuenca in the piano and solfège classes.

One year later, in 1998, he moves to Luxembourg, country of his father. He enters in the Music Conservatory of Luxembourg where he studies: piano, piano accompaniment, clarinet, chamber music, orchestration, music history, harmony, pedagogy, methodology, orchestra conducting, analysis, composition, music informatics, organ & counterpoint (among others).

The positive Luxembourgish music environment has allowed him to work as free-lance composer since 1999 and as conductor since 2004. His catalogue of works contains more than 90 pieces of several music styles going from chamber music works, film music or symphonic pieces. His works have been performed in Spain, Germany, France, Belgium, Luxembourg, The Netherlands, Slovenia, Greece and USA (in New York), among other countries. He also works as arranger/orchestrator, counting with many projects with the Luxembourg Philharmonic Orchestra, the Luxembourg Brass Ensemble, the Instrumental Ensemble of the University of Luxembourg and, recently, the National Orchestra of France.

In 2005 he continues his harmony & counterpoint studies in Paris in the 17th District Conservatory as well as in the “Conservatoire National de Région”. In 2006 he enrolls in the CNSMDP (Conservatoire National Supérieur de Musique et Danse de Paris) where he obtained prizes in Harmony, Fugue, Counterpoint, XXth Century Music Writing, Orchestration & Conducting. His studies in Paris have been rewarded with a final Master Diploma on Music Writing in June 2011.

He currently teaches at Luxembourg Music Conservatory and conducts several ensembles. He combines these activities with other composition & conducting projects as a Freelancer.