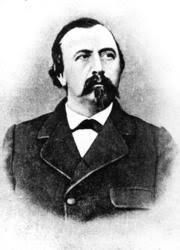 Fontaine was the third son of Gaspard-Théodore-Ignace de la Fontaine, who was appointed Governor of Luxembourg in 1841, and subsequently served as the country’s first Prime Minister in 1848. Fontaine studied law at Liège, and spent a further year at Heidelberg pursuing Germanic studies from 1844 until 1847, before becoming a lawyer in 1850. From 1867 until 1870, he served as mayor of Stadtbredimus, in eastern Luxembourg’s Moselle Valley, and served as a Justice of the Peace in Vianden from 1881 and 1889. He lived in Stadtbredimus Castle from 1858 to 1881 where he would live for the last decade of his life. (Wikipedia)

« D’Mumm Séis oder De Geescht » is one of his most known comedies in luxembourgish. Created in 1855 it became a huge success and  encouraged Dicks to publish a german version « Mutter Suse »