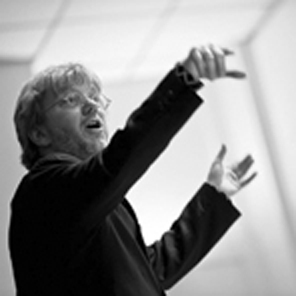 Martin Folz studied at the Musikhochschule Saarbrücken (organ, vocal and choral conducting – diploma with Volker Hempfling). As a member of the Stuttgart Chamber Choir (Conductor: Frieder Bernius) he developed his affinity for choral singing. A master class with László Heltay in 1992 is groundbreaking for its profile as a choir director. Martin Folz worked for 10 years as a church musician before he chooses the path to independence in 1990 as a freelance conductor and composer. In 1998 he receives the price of best young conductor of the International Choir Competition in Riva del Garda and in the same year the choirmaster scholarship of the German Music Council.

During his years as artistic director of the Trier – Friedrich Spee Choir (1993 – 2008) he closely collaborates with Leopold Hager and the Orchestre Philharmonique de Luxembourg, for their concert series and prepares numerous oratorios. In 1985 Martin Folz founds in Saarland the “ensemble 85 “, 16 members of a men’s chamber choir. Numerous prizes at national and international choir competitions document the 28 successful years of cooperation, which ends in the summer of 2013. In recent years his work in the field of children’s and youth choir is gaining greater professional importance. In 1998, together with partners from Lorraine, Luxembourg and Belgium, he founded the cross-border Youth Choir Robert Schumann.

As a freelance musician, choir director and choir pedagogue with teaching activities at the Conservatoire de Musique du Nord (since 2002) he is considered for his profound knowledge of the German choral scene. As a lecturer and experienced guest conductor, he often is invited by choirs, music schools and associations for groundbreaking impulses.

Martin Folz characterizes his compositions as “Music for people”. They often arise out of a particular situation or refer to a specific occasion. All his works document his artistic career since his youth as conductor of the local accordion orchestra, continuing in works for chamber orchestra, concert band, choir a cappella and later also for oratorio choir with orchestra. The phonetic implementation of word plays a central role for him.