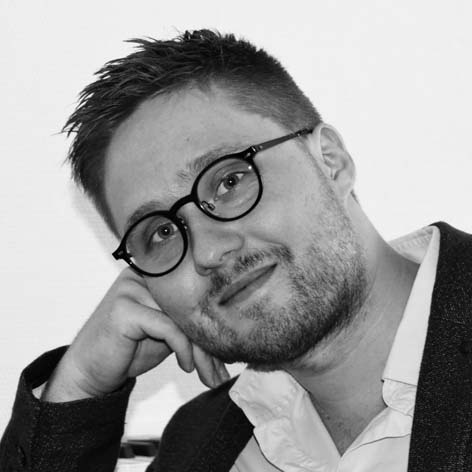 Jérôme Kauffmann started to draw his musical path at the age of eight with cello studies at the Conservatory of Esch- sur-Alzette (Luxemburg). After having been trained by André Navau for several years, he finished with Jean Halsdorf and with a superior grade (Diplôme supérieur). Besides his cello studies, he also took intense lessons of Music Theory, Analysis, Composition, Chamber Music, Conducting, Electro-acoustics and orchestration. He participated several times in different orchestra projects, « Orchestre des jeunes de la grande région » and « Orchestre philharmonique de Luxembourg ». In April 2013, Jérôme was given the opportunity to perform the solo part of Concerto N° 1 in E-flat Major by D. Shostakovitsch with the« Orchestre philharmonique de Luxembourg ». Jérôme is prize-winner of the « prix de la musique » discerned by the Rotary Club of Esch-sur-Alzette in Luxemburg.

After taking cello studies with Jeroen Reuling at the Royal Conservatory of Brussels, he moved to Sarrebruck to study Music Theory and Composition with Thomas Krämer and Arnulf Herrmann at the « Hochschule für Musik Saar ». Furthermore, Jérôme took a one-year course in orchestration and composition at the « Schola cantorum » in Paris.

Jérôme started to write music at the age of sixteen. He has a deep passion for contemporary music, film scoring and electronic music. He writes as well for solo instrument as for symphonic orchestra and creates music for children . In November 2015, collaborating with « RTL Lëtzebuerg » (national TV of Luxemburg) and the « Editions Saint-Paul », he created a full soundtrack for the stories of Lalumi by Luc Marteling (texts) and Paulette Thinnes-Kauffmann (design). There are three books with eleven stories targeting children from three to seven.

In the field of electronic music and sound design, Jérôme is very interested in working with synthesizers and all kinds of virtual instruments. He loves exploring the nature of a sound for then creating atmospheric works. At this time, he designs an album titled ‘Synth Journey’ which will be entirely produced with an analog Moog synthesizer, virtual synths, virtual intruments and live acoustic cello.

As a trained cellist, he very often creates his own pieces. On 28 May 2015, he performed his own sonata for cello and piano called « À la russe » during a concert at the « Hochchule für Musik Saar ». The sonata is a tribute to D. Shostakovitsch. During his studies in Germany, Jérôme was also a private teacher for cello and has been teaching at the « Ecole de musique de l’U.G.D.A.» in Luxemburg over the past three years.

Stuying, teaching and being a father never kept Jérôme away from his passion: Film Music. Over the last years, he created a serious amount of original compositions. In April 2016, he sent out his application to one of the most prestigious film scoring courses in the world and was awarded a place in the Master’s program in Scoring for Film and Visual Media at Pulse College (Dublin).

Living overseas doesn’t make it impossible for Jérôme to get his works performed and recorded. The famous french ‘Ensemble Stravinsky’ from Metz (France) recently performed Jérômes “Dialogues fantasques” as a World Premiere in the “Arsenal” Concert Hall in Metz (France). The composition was an order for their 15th anniversary celebration.